Investors surveying the investment landscape during the second week of April saw more thistles and dandelions than daffodils. Things in their field of view included US headline inflation hitting its highest level since 1981 and US mortgage rates their highest level since 2011, Sri Lanka defaulting on its foreign debt and Russia’s invasion of Ukraine stretching into its eighth week. 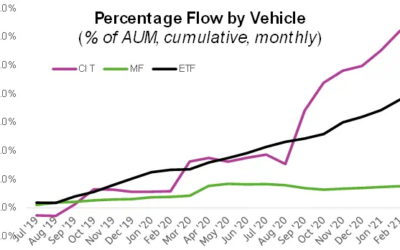 Global Navigator: Focus on liquidity and yield in early 2Q21

During the first week of April benchmark US equity indexes climbed to new record highs, the IMF forecast full year growth of 6.4% for the world’s largest economy — which added over 900,000 jobs in March – and US Federal Reserve officials reiterated their commitment to highly accommodative monetary policy.

Hopes for an early resolution of the Russian invasion of Ukraine took a hit during the first week of 2Q22 as evidence of Russian war crimes came to light. So did hopes for a measured pace to US interest rate hikes after US Federal Reserve Vice Chair Lael Brainard stated that the Fed needs to pick up the pace of its monetary tightening. The final week of March saw Russia’s invasion of Ukraine head into its sixth week. But investors appear increasingly comfortable with the idea that it is predominantly a European problem, that its short-term impact on energy prices will be blunted by higher production outside Russia and the end of winter in the northern hemisphere, and that the stalling of Russia’s advance makes a settlement of the conflict increasingly likely. Global Navigator: China Funds have a moment in the shade

For much of 4Q21 and the year-to-date, investors looking for a degree of security – especially in the emerging markets space – have turned to China. Between September of last year and the first week of March investors steered over $50 billion into EPFR-tracked China Equity Funds and another $11 billion into Greater China fund groups. Global Navigator: Covid pushes its way back onto the stage

Going into the second half of March, Russia’s invasion of the Ukraine – now in its fourth week – and the run-up to the US Federal Reserve’s first post-Covid interest rate hike continued to roil global markets. But the pandemic, pushed down the list of concerns as the Omicron variant’s grip on key markets ebbed, reinserted itself in the debate over supply chains and inflation by triggering major lockdowns in China. With Russia’s invasion of Ukraine heading into its third week, investors stepped up their exodus from Europe Equity Funds during the seven days ending March 9. Those tracked by EPFR saw weekly redemptions exceed $10 billion for the first time ever as combined outflows from Europe Equity and Bond Funds since Russia’s attack started on Feb. 24 climbed past the $25 billion mark. Russia’s assault on Ukraine, which started on Feb. 24, sent investors scrambling for cover while they adjusted to the rapidly changing outlook for energy and financial markets, global supply chains and the security of Europe. Going into March they pulled record-setting sums out of Europe Equity Funds, extended Europe Bond Funds longest outflow streak since 4Q18 and redeemed more than $5 billion from Europe Money Market Funds. A US market holiday and Russia’s increasingly aggressive posture towards the Ukraine gave mutual fund investors plenty of good reasons to stay on the sidelines during the third week of February – a week that ended with a full scale Russian attack on the Ukraine only hours away. The second week of February was another bumpy one for financial markets as Russian sabers rattled along the Ukrainian border, the price of a barrel of West Texas Intermediate crude oil hit $95 a barrel for the first time since 3Q14 and some US Federal Reserve policymakers talked of a 50 basis point hike in March. Fund flows reflected the uncertainty, with flows into all EPFR-tracked Equity Funds falling to less than a twentieth of the previous week’s total and redemptions from Bond Funds climbing again to a 49-week high.