Global Navigator: A ray of optimism breaks through

By an underwhelming margin, October’s headline number for US inflation came in below expectations of a 0.1% drop to 8%. But the reaction from investors during the second week of November to the 7.7% figure suggested that many believe the inflationary tide in the US has turned and peak interest rates will arrive sooner, and at a lower level, than previously feared.

During the week ending November 16, EPFR-tracked Equity Funds absorbed over $22 billion, with flows into US Equity Funds hitting their highest level since the second week of March, while flows into all Bond Funds hit a 13-week high. Technology Sector Funds pulled in another $1 billion, Industrial Sector Funds posted their biggest inflow in nearly nine months and Municipal Bond Funds had their best week, in flow terms, since early 3Q21.

Also attracting fresh money were Alternative Funds, with Derivatives Funds chalking up their 26th consecutive inflow, and Cryptocurrency Funds. “In the case of crypto funds, investors saw the writing on the wall when Bitcoin sold off during the second quarter,” observed EPFR research Director Cameron Brandt. “Assets and flows dropped sharply then, leaving relatively little in the path of the FTX storm.”

Both Balanced and Money Market Funds posted modest outflows. Although US Money Market Funds saw money flow out, their AUM is higher than it was after more than $1.2 trillion flowed in during the height of the Covid-19 panic in 1H20. But personal savings data suggests that Americans are drawing down the ‘excess’ savings they accumulated in 2020 and 2021. 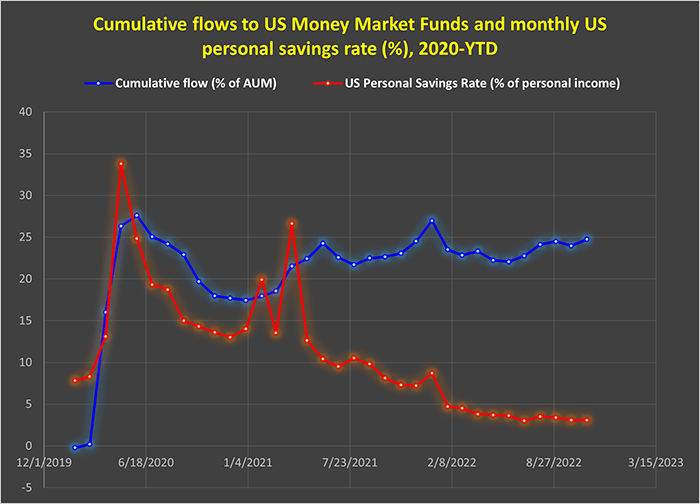 With all the major regional groups attracting fresh money, Emerging Markets Equity Funds posted their ninth inflow during the past 10 weeks going into the second half of November. Hopes of a more benign trajectory for US interest rates also gave Frontier Markets Equity Funds a boost, with flows into that group hitting a 24-week high.

This optimism did not spread to retail investors, who pulled money out of EM Equity Funds for the 11th straight week and the 28th time in the past 32 weeks. Funds with socially responsible (SRI) or environmental, social and governance (ESG) mandates also struggled, posting their third outflow since late October.

The latest week’s headline numbers show some support from China Equity Funds, which chalked up their 12th inflow in the past 14 weeks, as US President Joe Biden and Chinese Premier Xi Jinping exchanged views at the G20 summit. But flows into Taiwan (POC) Equity Funds came in at a 37-week high as investors continue to discount the odds of direct Chinese action to force reunification and bought into the island’s semiconductor story. 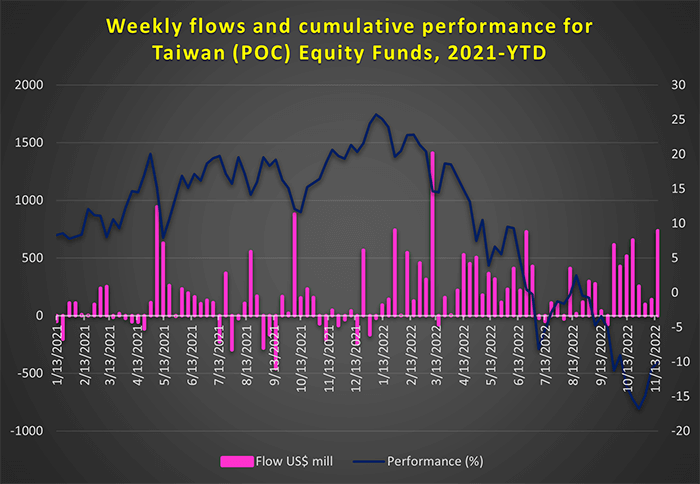 With investors willing to look beyond China, it was a good week for other Asia ex-Japan Country Fund groups. Flows into Philippines, Vietnam and Malaysia Equity Funds hit 14, 24 and 29-week highs respectively, India Equity Funds pulled in over $100 million for the first time in two months and Korea Equity Funds chalked up their eighth inflow in the past nine weeks.

Among the Latin America Country Fund groups, the prospect of a ‘soft landing’ for its biggest trading partner helped Mexico Equity Funds post their biggest inflow since late 1Q20. But Chile Equity Funds recorded their eighth outflow in the past 10 weeks as the issue of rewriting the country’s business friendly constitution resurfaces after September’s decisive rejection of the version created by a constitutional convention after a year’s work.

EMEA Equity Funds recorded a modest inflow despite the spike in regional tensions after a missile killed two Polish citizens near the border with Ukraine. Redemptions from Poland Equity Funds climbed to a 14-week high.

Mid-November saw flows into EPFR-tracked Developed Markets Equity Funds hit levels last seen in late May as the S&P 500 index made a run at the 4,000 point mark and the EuroStoxx 50 hit its highest level in over six months. Global, Pacific Regional, Australia, Canada and US Equity Funds all recorded inflows that offset redemptions from Europe and Japan Equity Funds.

The biggest contribution to the weeks headline number came from US Equity Funds, which recorded their biggest inflow since mid-March. Flows were broadly distributed, with over 65 funds pulling in $100 million or more. US companies continue to shrink their free-float, with research by EPFR Analyst Winston Chua putting the ratio of announced share buybacks and other corporate buying to new equity offerings at an eye-polling 13.8-to-1 over the past 12 months. 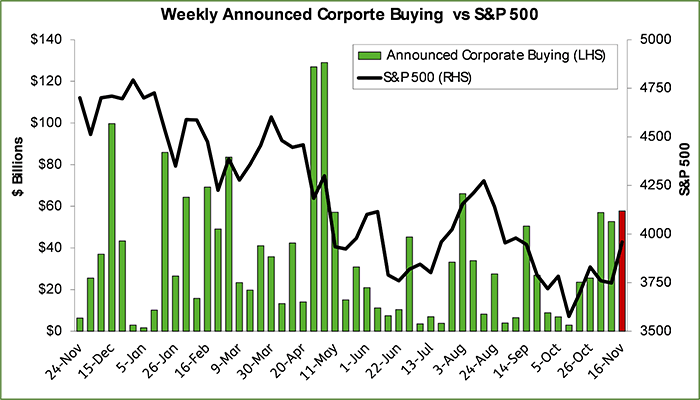 The outflow streak for all Europe Equity Funds hit 40-weeks and over $105 billion during a week when a missile fired during the Russia-Ukraine conflict landed in Poland, a NATO member, killing two people. The consequences of that war, from the influx of refugees to the diminishing access to cheap Russian energy, are translating into weak economic growth that many fear will get even weaker during the winter months. At the country level, Spain Equity Funds recorded their 14th outflow in the past 17 weeks, France Equity Funds their 32nd in the past 40 weeks and Italy Equity Funds their 19th in a row.

Redemptions from Japan Equity Funds hit a level last seen in the third week of 2020. The bulk of the redemptions came from domestically domiciled Japan Equity ETFs, while foreign domiciled funds posted consecutive weekly inflows for the first time since late July. Of the 10 funds recording the biggest outflows for the week, four track the Nikkei-225 index and three the TOPIX.

US interest rate optimism left its mark on EPFR-tracked Sector Fund groups during the week ending November, with several of the more defensive groups posting outflows while commitments to Industrial Sector Funds hit their highest level in over seven months and another $1 billion found its way into Technology Sector Funds.

In addition to hopes for the cost of capital, flows to US Technology Sector Funds were also boosted by the efforts by Amazon, Microsoft and other majors to restrain costs. China Technology Sector Funds, meanwhile, chalked up their 15th consecutive inflow. Four of the five funds that have attracted the most money during that run track the CSI Science and Technology Innovation Board. 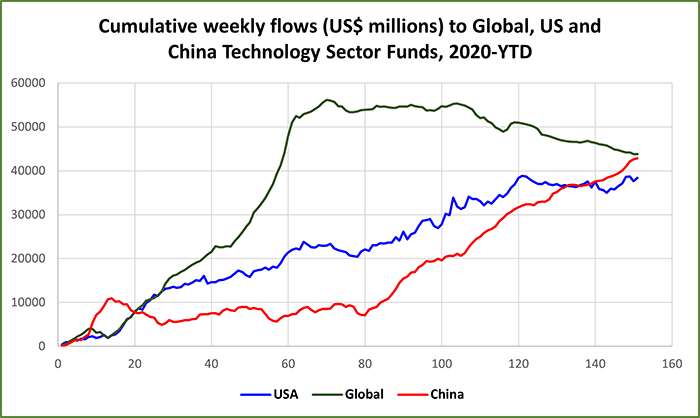 Healthcare/Biotechnology Sector Fund continued their recent run, pulling in another $650 million. Expectations of divided control of the US Congress, and the check that imposes on Democratic impulses to regulate the American healthcare sector, helped sentiment towards a sector under pressure earlier in the year from shortages of skilled workers.

Year-to-date, Energy Sector Funds rank fourth behind Real Estate, Infrastructure and Utilities Sector Funds when it comes to attracting fresh retail money. At the other end of the scale, retail investors have pulled over $12 billion out of Technology Sector Funds.

EPFR-tracked Bond Funds continued to benefit in mid-November from expectations that October’s lower-than-expected inflation number, and the ability of a Republican-controlled House of representatives to check on further fiscal stimulus spending, will translate into lower ‘peak’ US interest rates and a quicker return to rate cuts. The latest week saw overall inflows come in at a 14-week high as US Bond Funds absorbed $4.1 billion and Global Bond Funds recorded their biggest inflow in over seven months.

In addition to municipal debt, investors with a US focus moved up the curve. US Long Term Corporate Bond Funds attracted over $1 billion and flows into Long Term Sovereign Bond Funds climbed to a 14-week high. Treasury Inflation Protected Securities (TIPS) Funds extended an outflow streak that started in early September and US Bank Loan Funds recorded their 22nd outflow in the past 26 weeks. 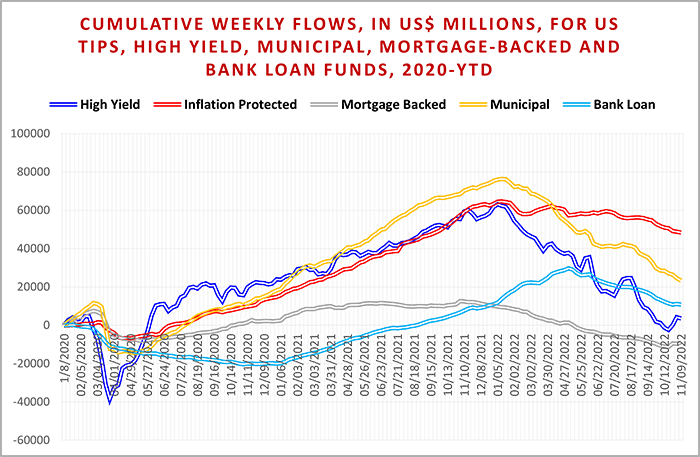 Redemptions from two Switzerland Bond Funds pushed the headline number for that group into record-setting territory and helped to end Europe Bond Funds’ three-week run of inflows. Switzerland Bond Funds with socially responsible (SRI) or environmental, social and governance (ESG) mandates did post inflows during the week, their 21st since the beginning of June.

Both of the major multi-asset fund groups, Balanced and Total Return Funds, experienced net redemptions. The last time either group posted an inflow was mid August.