Investors came into November anticipating a pivot towards Republicans in the US mid-term elections and fearing that October’s inflation data would set the stage for another 75 basis point rate hike by the US Federal Reserve after their December meeting. But the ‘red wave’ was blunted by a green breakwater of younger voters and price growth in the world’s largest economy last month slowed to 7.7% year-on-year.

With a number of key races in the mid-term elections yet to be called, and the US inflation rate still painfully high, the outlook for President Joe Biden’s regulatory, environmental and fiscal agendas remains unclear. So does the willingness of the Fed to shift gears and tighten at a more moderate pace.

Once again, flows to EPFR-tracked Funds during the first full week of November mirrored the mixed interpretations of key events and data points. Bond Funds recorded their biggest weekly inflow since early August and flows into Inflation Protected Bond Funds fell to their lowest level since their current inflow streak began in late August. But, consistent with expectations of more aggressive tightening by the Fed, Gold Funds extended a redemption streak stretching back to late June, outflows from Technology Sector Funds climbed to a nine-week high and over $1 billion flowed out of both High Yield and Emerging Markets Bond Funds.

The headline number for all Equity Funds was also negative. But, within that universe, several groups fared well. Flows into Dividend Equity Funds hit a five-week high, Equity Funds with socially responsible (SRI) or environmental, social and governance (ESG) mandates chalked up their fourth inflow quarter-to-date and Equity Collective Investment Trusts (CITs) took in fresh money for the seventh time in the past 10 weeks. At the single country and asset class fund levels, Cryptocurrency Funds recorded a modest inflow despite the collapse of crypto exchange FTX, Silver Funds experienced their heaviest redemptions since late July and Bank Loan Funds chalked up their 21st outflow in the past 22 weeks. Flows into both Switzerland and Canada Bond Funds hit 18-week highs while Italy Bond Funds extended their longest inflow streak since 4Q21.

The first full week of November also saw China Equity Funds record their first outflow since mid-August, with redemptions hitting a 13-week high. Those outflows, and the end of Korea Equity Funds’ eight-week run of inflows, contributed to the biggest collective outflow from all Asia ex-Japan Equity Funds in three months. Among other Asia Ex-Japan Country Fund groups, Taiwan (POC) Equity Funds extended their inflow streak to seven weeks and $2.7 billion, flows into India Equity Funds rose for the third straight week, commitments to Indonesia Equity Funds climbed to a seven-week high and Greater China Equity Funds recorded only their second inflow during the past 15 weeks.

The headline number for Latin America Equity Funds was dented by Mexico Equity Funds’ second consecutive outflow and the sharp drop off in fresh money flowing to Brazil Equity Funds. Those funds received just $3 million after two weeks where inflows came in around the $250 million mark. Funds with regional mandates are among the groups showing positive flows and performance year-to-date, along with those dedicated to Brazil and Mexico. 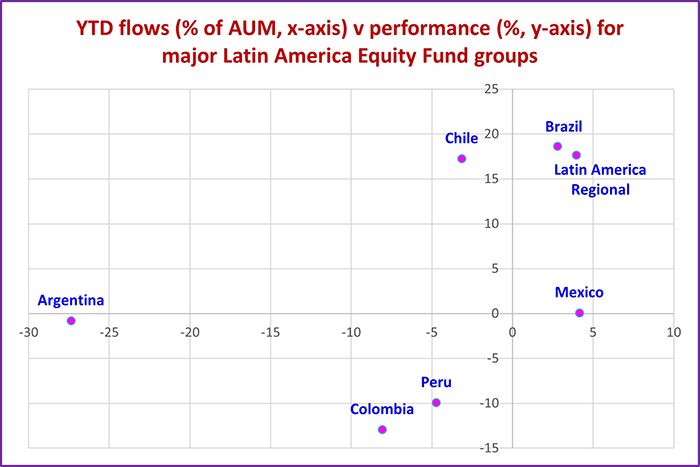 EMEA Equity Funds chalked up their fourth inflow in the past six weeks, with Turkey Equity Funds standing out among the dedicated country groups. With the Turkish central bank defying conventional economic theory and aggressively cutting interest rates in the face of inflation running at over 80%, the country’s benchmark equity index is up over 200% so far this year as domestic investors seek protection from that inflation and foreign investors take advantage of their currencies’ buying power.

Although Global Equity Funds recorded their biggest inflow since early June, EPFR-tracked Developed Markets Equity Funds saw their latest inflow streak come to an end during the week ending November 9. US, Europe, Japan, Pacific Regional and Canada Equity Funds all posted outflows as investors waited to see which way the political and inflationary winds in the US were blowing.

Developed Markets Equity ETFs did post a collective inflow, their seventh in a row, but the group overall failed to attract retail support for the ninth straight week and 18th time in the past 20 weeks. With headline inflation in the Eurozone hitting a fresh record high in October, wage growth in the currency union running north of 5% and Russia’s invasion of Ukraine in its ninth month, investors continued cutting their exposure to Europe. The latest redemptions from Europe Equity Funds extended their current outflow streak to 39 weeks and lifted the total redeemed during that run over the $100 billion mark. Europe Equity Funds with socially responsible (SRI) or environmental, social and governance (ESG) mandates did record their seventh consecutive inflow.

Japan Equity Funds posted consecutive weekly outflows for the first time since late August as slumping exports to China and shortages of key components hit domestic manufacturers. Business investment is, however, holding up.

Redemptions from US Equity Funds climbed to a nine-week high, with the bulk of the outflows coming on the final day of the reporting period as investors waited for October’s inflation numbers and weighed the uncertain implications of the mid-term elections on economic policymaking during the next two years. Flows into all US Equity Funds managed for growth hit a 13-week high but were offset by redemptions from funds with value and mixed mandates. Large Cap Funds saw their eight-week run of inflows come to an end.

Retail commitments to Global Equity Funds, the largest of the diversified Developed Markets Equity Fund groups, hit a nine-week high. Funds with fully global mandates attracted twice as much fresh money as their ex-US counterparts did.

In anticipation of better-than-expected 3Q22 earnings from major US technology plays (Meta, Google, Amazon), investors steered a net $5.6 billion into Technology Sector Funds during the four weeks leading into November. But, after some decidedly mixed results and Elon Musk’s radical shake-up of newly acquired Twitter, investors pulled nearly $1 billion out of this fund group. Managers of US Equity Funds have been cutting their exposure for some time: the average allocation to this sector has seen the biggest drop year-to-date among the 11 major groups. Elsewhere, Real Estate Sector Funds were hit with their heaviest redemption in over six months weeks as sentiment capitulated in the face of higher interest rates and the threat of recession in Europe. Japan Real Estate Sector Funds, which operate in a market where the central bank is still trying to encourage inflation, absorbed money for the ninth straight week, while dedicated US and Global funds continued to see repressed interest.

Hopes that Republican control of at least one of the houses of Congress will reduce the odds of US fiscal policy conflicting with the Federal Reserve’s campaign against inflation helped EPFR-tracked Bond Funds record their second inflow in the past three weeks and their biggest since early August. The case for a ‘pivot’ in Fed policy – or moderation in the current pace of tightening – was boosted after the close of the latest reporting period by a lower-than-expected inflation number for October.

In addition to US Bond Funds, both Canada and Europe Bond Funds ended the week having absorbed fresh money during the week ending November 9 while Emerging Markets, Global and Japan Bond Funds experienced net redemptions.

At the asset class level, Bank Loan Funds posted their 21st outflow in the past 22 weeks, Inflation Protected Bond Funds extended their longest outflow streak since an 18-week run ended in early 1Q19 and investors pulled money out of High Yield Bond Funds for the 10th time since mid-August.

Emerging Markets Bond Funds surrendered money for the 12th week in a row as funds with local currency mandates extended a redemption streak stretching back to mid-April. Retail investors continue to keep their distance having pulled money out of this group in all but three of the weeks year-to-date. It was another solid week for Europe Bond Funds, which pulled in over $1.5 billion for the second week running. Funds dedicated to corporate debt pulled in $5 for every $3 absorbed by Europe Sovereign Bond Funds. At the country level, flows into Switzerland Bond Funds hit an 18-week high, Norway Bond Funds attracted a net $293 million and Italy Bond Funds extended their longest inflow streak since 4Q21 while redemptions from Spain Bond Funds were the biggest in nearly four months.