In the US, November is – among other things – National Gratitude Month. For investors, however, it is already shaping up to be another month of twists, turns and developments that can cut both ways. Finding mercies, even small ones, in this environment is proving difficult.

The week ending November 2 started with the European Central Bank raising its key interest rate by 75 basis points and ended with the Federal Reserve doing the same. The days in between were filled with mixed earnings reports, talk of Russia’s willingness to use nuclear weapons, North Korean missile launches and new anti-Covid lockdowns in China.

Flows to EPFR-tracked fund groups reflected the continued uncertainty, with Alternative, Balanced and Bond Funds posting moderate outflows while a net $6.2 billion flowed into Equity Funds. The week’s most eye-catching flows went into US liquidity vehicles, with US Money Market Funds accounting for over 90% of the $62 billion absorbed by all Money Market Funds.

Equity investors retained their marked preference for direct exposure to the US and China. But they showed some appetite for funds with global mandates, with Global Equity Funds posting only their second inflow since the second week of September and Global Emerging Markets (GEM) Equity Funds snapping an 11-week outflow streak. Dividend Equity Funds posted their 12th inflow in the past 13 weeks, and Equity Funds with socially responsible (SRI) or environmental, social and governance (ESG) mandates bounced back from the previous week’s record-setting outflow. At the asset class and single country fund levels, China Equity Funds extended their current inflow streak to 10 weeks and $21 billion and China Bond Funds their outflow streak to 17 weeks and $7.6 billion. Sweden Equity Funds took in over $100 million for the sixth time in the past eight weeks, flows into both Italy and France Bond Funds hit 26-week highs and Brazil Equity Funds recorded their biggest inflow since mid-June. Investors pulled money out of Inflation Protected Bond Funds for the 10th week running, High Yield Bond Funds posted consecutive weekly inflows for the first time since mid-August and Cryptocurrency Funds posted their fourth inflow in the past seven weeks.

The hope, recently expressed by Chinese officials, that investors ignore the bad news chronicled by foreign financial journalists and take an optimistic view of China’s economic prospects were fulfilled – at least for another week – coming into November. Dedicated China Equity Funds posted inflows for the 10th consecutive week and Global Emerging Markets (GEM) Equity Funds, which allocate on average over a quarter of their portfolios to Chinese assets, saw an 11-week run of outflows come to an end.

Those flows, and the biggest collective inflow for Latin America Equity Funds since the second week of June, allowed all EPFR-tracked Emerging Markets Equity Funds to chalk up their eighth inflow in the past 10 weeks and their biggest since early April.

Analysis of flows into China Equity Funds by currency shows that domestic money is driving recent flows while US dollar-denominated flows have ebbed since the summer. The foreign exodus has offered domestic investors, whose alternative options (property, bonds) are looking unappealing, the chance to take advantage of a cheap market that is poised to take off if-and-when Covid restrictions begin to ease. Among the other Asia ex-Japan Country Fund groups, Thailand Equity Funds recorded outflows for the 13th time in the past 15 weeks, Taiwan (POC) Equity Funds attracted fresh money for the 27th time since the beginning of the second quarter and Indonesia Equity Funds extended their longest inflow streak in over a year.

EMEA Equity Funds were the only major regional group to record an outflow, with the ‘A’ in their acronym particularly out of favor. Africa Regional Equity Funds posted their ninth consecutive outflow and 24th in the past 25 weeks while redemptions from South Africa Equity Funds hit a 23-week high. Funds dedicated to Russia, whose assault on Ukraine is a major factor in the depressed investor appetite for EMEA exposure, posted their biggest outflow since the first week of February.

Despite being bracketed by 0.75% interest rate hikes from two of the world’s major central banks, the week ending November 2 saw EPFR-tracked Developed Markets Equity Funds post a third straight inflow for the first time since mid-June. So far this year they have attracted less than a 10th of the $777 billion they absorbed during 2021. Two major groups, US and Global Equity Funds, accounted for the bulk of the week’s modest collective total. US Equity Funds posted their fourth straight inflow on the back of the biggest flows into Large Cap Value Funds since the second week of June. Funds with socially responsible (SRI) or environmental, social and governance (ESG) mandates, meanwhile, posted consecutive weekly outflows for the first time in five months. The latest sector allocations data shows that the average exposure of US Equity Fund managers to technology stocks is at a 28-month low while allocations to energy plays are at levels last seen in 2Q19.

Investors pulled $570 million out of Japan Equity Funds during a week when North Korea stepped up its missile tests, the yen continued to test the 32-year low it touched against the US dollar earlier in the quarter, the country’s government unveiled a $200 billion stimulus package and manufacturing surveys suggest business confidence continues to ebb.

In the case of Technology Sector Funds, the fourth straight week of inflows in excess of $1 billion occurred against a backdrop of mixed earnings reports that saw bellwethers Microsoft and Apple beat estimates for both revenue and earnings while Facebook parent Meta Platforms fell short. Investors responded by pulling money out of Metaverse Technology Funds for the fifth straight week, with the latest redemptions the largest in nearly three months. Elsewhere, Semiconductors Funds posted their fifth inflow in the past seven weeks, Digital Tech Funds snapped an eight-week outflow streak with their biggest inflow in 14 weeks and Cloud Computing Funds eked out a small inflow. With talk about windfall taxes on energy and bank profits picking up steam on both sides of the Atlantic, Financial Sector Funds posted their seventh outflow in the past nine weeks and flows into Energy Sector Funds were subdued. In the case of the latter, the group managed to keep its four-week inflow streak alive – the longest run since one ending mid-January – helped by the $200 million committed to a single oil-related fund.

A brief moment in the sun for EPFR-tracked Bond Funds did not survive the messaging that accompanied the US Federal Reserve’s latest 0.75% interest rate hike. Having snapped a lengthy outflow streak in late October, these funds started November by posting their 10th outflow during the past 11 weeks. While signaling the Fed’s willingness to tighten at a slower pace when conditions permit, Chairman Jay Powell made it clear that those conditions could take longer to materialize – and take more tightening to achieve – than markets are currently expecting.

With the Fed’s policy meeting coming at the end of the latest reporting period, some of the earlier optimism about a slower pace of tightening bled into the latest week. Flows into High Yield Bond Funds hit a 13-week high, Bank Loan Funds saw a 20-week run of outflows come to an end and Europe Bond Funds absorbed $2.5 billion. But that was not enough to offset redemptions from Emerging Markets, US and Global Bond Funds. Investors also pulled over $1 billion from both of the major multi-asset fund groups, Balanced and Total Return Bond Funds.

The top quintile of EPFR’s weekly Multi Asset Rankings is currently occupied by short and long-term US treasuries and cash while bank loans and diversified debt rank lowest. 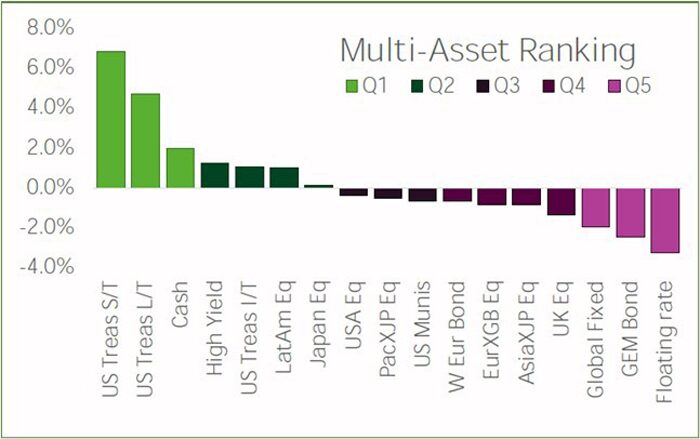 Investors with a US focus took a different tack from the rankings. After several weeks of strong inflows, US Short Term Sovereign Bond Funds posted their biggest outflow since mid-August and flows into Long Term Sovereign Bond Funds were subdued. Overall, they favored corporate debt over sovereign debt and, in the corporate space, US High Yield Funds took in nearly three times the amount of fresh money absorbed by their investment grade counterparts.

Flows into Europe Bond Funds hit their highest level since the second week of September 2021 as investors move to take advantage of increasingly positive yields, confident that when push-comes-to-shove regional policymakers will shift the goalposts rather than push social and regional cohesion to the breaking point. Appetite was broadly based, with 26 individual funds taking in over $50 million.