With rising prices and higher interest rates joining, for the moment, death and taxes on the list of life’s certainties, investors kept reducing risk and unshackling themselves from fixed income assets in mid-October. EPFR-tracked Bond Funds posted their ninth consecutive outflow, a run that has seen over $80 billion pulled out of this group, while redemptions from Alternative and Balanced Funds since the final week of August stand at $17 billion and $31 billion, respectively.

The odds of this pattern changing for the better in the coming weeks are slim. Temperatures are dropping in the Northern Hemisphere, boosting demand for pinched energy supplies, and the next three weeks hold legislative elections in the US, meetings of the European Central Bank and US Federal Reserve, the conflict in Ukraine passing the 250-day milestone and the third British prime minister since the first week of September.

Investors looking to put money to work stuck to the script that has been in place since the middle of the previous quarter, seeking exposure to the equity of the world’s two largest economies, dividends, investment grade yield and aspects of the global technology story. Technology Sector Funds absorbed over $1 billion for the second week running, Short-Term Sovereign Bond Funds extended their current inflow streak to nine weeks and $34 billion, flows into US Equity Funds hit an 18-week high, China Equity Funds took in fresh money for the 19th time in the past 20 weeks, and Dividend Equity Funds recorded their 11th straight inflow.

Money Market Funds posted an overall inflow of $14.4 billion during the third week of October which was driven by above average flows into UK Money Market Funds. Investors pulled $21 billion out of US-focused funds despite rising yields and a renewed appreciation for the virtues of cash. Managers of US Money Market Funds continue to emphasize liquidity, with data from EPFR’s iMoneyNet team showing weighted average maturities for taxable fund portfolios below 20 days coming into October (see chart below). 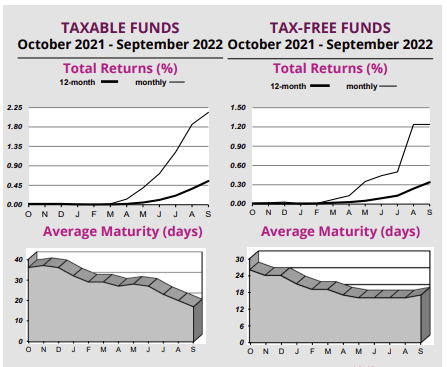 At the asset class and single country fund levels, redemptions from Korea and China Bond Funds climbed to 15-week highs, Saudi Arabia Equity Funds chalked up their biggest inflow since late April and investors pulled money out of Italy Equity Funds for the 15th week running. High Yield Bond Funds saw their current run of outflows hit nine weeks and $33.5 billion, money flowed out of Bank Loan Funds for the 19th straight week and Convertible Bond Funds experienced net redemptions for the 18th time in the past 20 weeks.

Although Chinese President Xi Jinping’s staying-the-course speech to delegates at the ruling Communist Party’s 20th National Congress did not extinguish flows to China Equity Funds, it threw enough cold water on them for the latest week’s headline number to come in at the lowest level since their current inflow streak began. That, in turn, helped to pull the number for all EPFR-tracked Emerging Markets Equity Funds into the red for the first time since early September. Among the other Asia ex-Japan Country Fund groups, Thailand Equity Funds posted consecutive weekly inflows for the first time since mid-July and Indonesia Equity Funds recorded their fourth inflow in the past five weeks. Despite military tensions between North and South Korea, as well as the latter’s need to import over 92% of the oil it consumes and the vulnerability of its indebted households to rising interest rates, Korea Equity Funds recorded a sixth straight inflow.

Latin America Regional Equity Funds enjoyed their biggest inflow in over four months, but with Brazil’s run-off election nearing and the race narrowing, Brazil Equity Funds snapped a three-week inflow streak. It was the group’s fourth outflow in the past eight weeks and 11th in the past 17 weeks.

EPFR-tracked Developed Markets Equity Funds posted their biggest inflow since mid-June during the week ending Oct. 19, helped by an end to Global Equity Funds longest outflow streak in over three years and by flows to US Equity Funds hitting an 18-week high. Retail investors were net redeemers for the 23rd time in the past six months during a week when collective performance for all DM Equity Funds hit an 11-week high.

Although Europe ex-UK Regional Equity Funds were among the groups turning in the best collective performance, Europe Equity Funds overall extended their current outflow streak to 36 weeks and $97 billion as regional policymakers grapple with stubbornly high inflation, the energy squeeze stemming from Russia’s invasion of Ukraine and spillovers – immigration, higher defense spending – from that conflict.

The weakness of European and other non-US currencies remains an issue for many investors. But EPFR’s weekly G10 Currency Rankings, which are based on FX flows within the portfolios of funds with cross-border mandates, suggest that managers with access to US dollars are acting on the opportunity to buy assets at a discount. Currency strength is a particular concern for investors looking at Japan, where the yen has fallen to a 32-year low versus the US dollar thanks to the rapidly widening gulf between the Bank of Japan’s deflation-fighting policy mix and the anti-inflationary measures being adopted elsewhere. Japan Equity Funds, which are coming off their biggest monthly inflow since October 2021, did record their fourth inflow in the past six weeks, but funds domiciled outside Japan collectively posted their seventh outflow since late August.

Funds dedicated to the other major developed Asian market, Australia, recorded their ninth outflow in the past 12 weeks as concerns about the impact of a slowing Chinese economy of demand for Australian exports continue to weigh on investor sentiment.

US Equity Funds recorded their biggest inflow in four months as key indexes rallied and investors looked for the best options in a highly uncertain world. Large Cap Blend ETFs absorbed the lion’s share of the headline number and US Dividend Equity Funds racked up their 11th consecutive inflow.

With the 3Q22 earnings season kicking into gear, investors had growing amounts of grist for their sector allocation decisions during the third week of October. For the first time since the final week of August, the number of EPFR-tracked Sector Fund groups reporting inflows climbed to seven. These ranged from $29 million for Infrastructure Sector Funds to $1 billion for Technology Sector Funds.

Neither rising US interest rates or Chinese President Xi Jinping’s inflexible views on state control of key sectors dented investor enthusiasm for technology exposure, with both US and China Technology Sector Funds pulling in over $600 million for the week. On the flip side, funds dedicated to the EMEA region suffered their biggest outflow in 31 weeks with Israel Technology Sector Funds, which have benefited from global interest in cybersecurity, driving the headline number for all EMEA funds. On the other side of the coin, Utilities Sector Funds experienced their heaviest redemptions since mid-1Q21. Eight out of the top 10 funds ranked by outflows were ETFs. Water Funds, a sub-group that was very popular with investors last year, have now posted outflows for five straight weeks. That is their longest outflow streak since one that ended in the final week of May.

Silver Funds posted consecutive weekly inflows for the first time since late 2Q22 while redemptions from Gold Funds climbed to a 13-week high.

Investors pulled another $12 billion out of EPFR-tracked Bond Funds during the week ending Oct. 19 as they looked ahead to further rate hikes by the US Federal Reserve and European Central Bank, watched Europe slip closer to recession, eyed the more than 250 basis point spread between Italian and German debt and debated just how high the corporate bond default rate will climb in 2023.

At the asset class level, Bank Loan Funds extended their longest outflow streak since 1H19 and investors pulled money out of Municipal Bond Funds for the 11th consecutive week while redemptions from Inflation Protected Bond Funds slipped to an eight-week low.

Headline inflation in the US remains north of 8%, and US Treasury Inflation Protected Securities (TIPS) Funds recorded their smallest outflow since late August despite the market’s conviction that another 75 basis point hike in short-term rates is coming early next month. Redemptions from all US Bond Funds, which have yet to record a retail inflow so far this year, climbed to a 16-week high despite another solid week for Short Term Treasury Funds and the over $1 billion committed to Long Term US Corporate Bond Funds.

Emerging Markets Bond Funds recorded their ninth consecutive outflow, with redemptions from funds with local currency funds outpacing those from hard currency funds by a 2.5 to 1 margin. Chine property company CIFI Holdings defaulted on an offshore bond, adding to the pressure on China Bond Funds which chalked up their 36th weekly outflow since mid-February and their biggest since mid-July. Over the past 20 months, managers of diversified Global Emerging Markets (GEM) Bond Funds have rotated exposure from China and the combatants in Ukraine to a number of markets with Chile and Peru to the fore. The turmoil in UK debt markets added to the headwinds facing Europe Bond Funds, which posted their ninth outflow in the past 10 weeks as redemptions from UK Bond Funds jumped to a 12-week high.