Global Navigator: Ready for the times to get better

Impending rate hikes from the European Central Bank and US Federal Reserve. The striking selloff experienced by Chinese assets. Mixed earnings reports. Russia’s invasion of Ukraine heading into its ninth month. That may be yesterday’s news, if flows to EPFR-tracked Equity and Bond Funds during the fourth week of October are any indication.

Instead, as benchmark US equity indexes climbed over 4%, investors focused on signs that supply chains are improving, the possibility that recent selloffs are overdone, hopes a milder winter and a better supply picture will spare European energy users the worst case scenario this winter and the decision by Canada’s central bank to but the size of its interest rate hike for the second straight meeting.

The week ending Oct. 26 saw Bond Funds snap a nine-week outflow streak while Equity Funds recorded their biggest collective inflow since late May. Flows into High Yield Bond Funds jumped to an 11-week high, both China Equity and Technology Sector Funds attracted over $2 billion and Mortgage-Backed Funds recorded their biggest inflow in just under a year.

With both China and the US releasing better-than-expected 3Q22 GDP figures, investors have fresh reasons to buy into the resilience of the world’s two largest economies. Year-to-date, US and China Equity Funds have been, by some margin, the most successful country fund groups when it comes to attracting fresh money. Not every fund group benefited from this change in focus. Dividend Equity Funds saw an 11-week inflow streak come to an end and Equity Funds with socially responsible (SRI) or environmental, social and governance (ESG) mandates posted their biggest weekly outflow since EPFR started tracking them in 4Q00.

Chinese assets received another pummeling during the week ending Oct. 26 as investors responded to Chinese President Xi Jinping’s consolidation of power during the ruling Communist Party’s 20th National Congress and his reaffirmation of key economic and social policies. But EPFR-tracked China Equity Funds pulled in over $3 billion, underpinning a headline number for all Emerging Markets Equity Funds that was the largest since the fourth week of April.

The latest week also saw flows into Latin America and EMEA Equity Funds hit 10 and 27-week highs, respectively, while the diversified Global Emerging Markets (GEM) Equity Funds chalked up their 11th straight outflow and 27th in the past 30 weeks.

Both domestically and foreign-domiciled China Equity Funds attracted fresh money as investors saw opportunities in the latest selloff. Many of those investors are still expecting that Xi, now that he has secured another five-year term, will be more open to measures that boost the economy, stabilize the key property sector and lift Chinese equity markets. The latest country allocations data shows that China still accounts for a quarter of the average GEM Equity Fund portfolio, with a weighting that is nearly double that of the market – India – with the second-largest allocation. 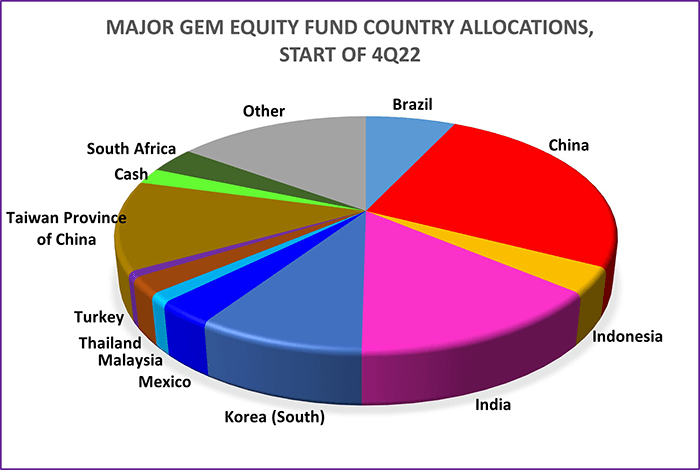 India Equity Funds snapped their three-week run of outflows as the country celebrated its annual Festival of Lights, Korea Equity Funds extended their longest inflow streak since the one that ended in early February and Taiwan (POC) Equity Funds recorded their 11th inflow in the past 12 weeks.

During the fourth week of October, EPFR-tracked Developed Markets Equity Funds shrugged off yet another outflow from Europe Equity Funds to record their biggest inflow since late May. Flows into US Equity Funds climbed to a 19-week high and Japan Equity Funds recorded their fourth inflow in the past five weeks as major indexes in Europe, the US and Japan recovered more lost ground.

The biggest share of the latest flows into US Equity Funds went to Large Cap Blend Funds, but Large Cap Growth and Value Funds recorded their biggest inflows since mid-August and mid-June, respectively. None of the major groups by capitalization or style attracted fresh money from retail investors. Europe Equity Funds saw their current redemption streak hit 37 weeks and $99 billion ahead of the European central Bank’s October policy meeting, which concluded with the ECB voting for its second 75 basis points rate hike. That gives further credence to predictions that half of the Eurozone’s economies will be in recession by the New Year. What enthusiasm investors expressed at the country level was reserved for Nordic markets, with Sweden Equity Funds absorbing another $178 million and flows into Finland Equity Funds climbing to a 23-week high.

Flows to Japan Equity Funds were positive for the fourth time in the past month as commitments to Japan ETFs offset modest redemptions from actively managed funds for the second week running. The latest sector allocations data shows that managers of Japan Equity Funds lifted their average exposure to consumer staples and healthcare stocks to an 18-month high coming into October, Weightings for both materials and information technology plays, meanwhile, slipped to a 24-month low.

Global Equity Funds, the largest of the diversified Developed Markets Equity Fund groups, recorded their sixth outflow in the past seven weeks as they extended their longest run of retail redemptions since 4Q19.

Despite mixed earnings reports, anticipation of 75 basis point rate hikes on both sides of the Atlantic and a backlash against the Chinese Communist Party’s confirmation of President Xi Jinping’s policy goals, nine of the 11 major Sector Fund groups tracked by EPFR recorded an inflow during the week ending Oct. 27. The two exceptions were Utilities and Commodities Sector Funds.

For the third week running Technology Sector Funds were the biggest money magnets, with the latest inflows the biggest in nearly seven months and China Technology Sector Funds chalked up their 11th consecutive inflow. Of the 10 funds recording the biggest inflows, seven are dedicated to Chinese technology while four of the 10 posting the largest outflows have semiconductor mandates. Cybersecurity Funds, which saw their popularity soar in the wake of the Covid-19 pandemic, are another sub-group that has struggled of late. Some positive earnings surprises helped Industrial Sector Funds post their biggest weekly inflow in over two months while renewed appetite for biotechnology plays was reflected in the biggest inflow for Healthcare/Biotechnology Sector Funds since mid-July.

Infrastructure Funds added to a run that has seen them post inflows 40 of the past 44 weeks. Expectations of fresh Chinese stimulus spending, projections the post-war rebuilding of Ukraine may require $750 billion or more and sustainable energy goals that call for green infrastructure spending in the trillions have added to the investment case for this fund group.

Quarter-to-date, six of the 11 groups have delivered positive collective performance with Energy and Commodities at the top of the rankings. Utilities Sector Funds are the worst performer QTD.

EPFR-tracked Bond Funds ended their latest outflow streak in late October as more investors embraced the idea that the next round of rate hikes in Europe and the US will put inflation on a trajectory that allows central bankers to ease – or even end – the current tightening cycle. Flows into US Bond Funds climbed to an 11-week high, Europe Bond Funds snapped their five-week outflow streak and Japan Bond Funds posted consecutive weekly inflows for the first time since late August.

Europe Bond Funds recorded their latest inflow ahead of the European Central Bank’s latest 75-basis point rate hike. But the ECB, unlike the US Federal Reserve, is moving slowly when it comes to trimming its balance sheet. By reinvesting the proceeds of maturing debt, the ECB has ammunition to support less creditworthy Eurozone markets. Flows into Europe ex-UK Regional and Italy Bond Funds climbed to 11 and 14-week highs, respectively.

Although US Short Term Sovereign Bond Funds had another good week, it was funds dedicated to investment grade corporate bonds that fared best among US Bond Fund groups. Collective inflows to US Corporate Bond Funds hit their highest level since early 4Q20 and exceeded the total committed to their sovereign counterparts for the first time since mid-August. Meanwhile, analysis of actively managed fund holdings by EPFR’s Quant Team indicates that managers have been selling Treasuries rather than corporate bonds to meet redemptions. 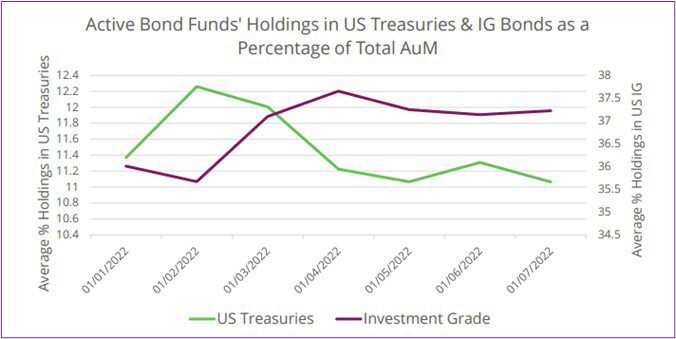 Emerging Markets Bond Funds chalked up their 10th consecutive outflow, with the ratio of redemptions from Local versus Hard Currency Funds climbing from 2.5 to 1 the previous week to 3.1 to 1, as retail redemptions climbed to a 17-week high. Funds with socially responsible (SRI) or environmental, social and governance (ESG) mandates posted their biggest outflow on record as they extended their longest outflow streak since 4Q13.