The present, in mid-August, continued to offer little obvious comfort to investors. Russia’s invasion of Ukraine ground on towards the 200-day mark, drought weighed on transport, agriculture and energy in countries ranging from France to China, the seven-day average for global Covid-19 cases remained above 900,000 and inflation remains elevated in the US, Europe and many emerging markets.

Investors, however, kept their eye on a future where current economic risks and weakness translates into a return to cheap money and big fiscal stimulus packages. EPFR-tracked Equity Funds posted consecutive weekly inflows for the first time since mid-June, Bond Funds extended their longest inflow streak in over nine months, Cryptocurrency Funds posted their fourth inflow in the past five weeks and Technology Sector Funds recorded their biggest weekly inflow since mid-April.

Dividend Equity Funds continued to shine, posting their 30th inflow in the 33 weeks year-to-date, with funds dedicated to US companies again leading the way. Overall, the only major EPFR-tracked fund group to record outflows during the week ending August 17 were Money Market Funds, which surrendered a modest $4.9 billion, while a net $7.9 billion flowed into Equity Funds. Investors also steered a net $326 million into Balanced Funds, $510 million into Bond Funds and $721 million into Alternative Funds.

With the S&P 500 index hitting its highest level since May 3 during the middle of the latest reporting period, US Equity Funds enjoyed another solid week that lifted EPFR-tracked Developed Markets Equity Funds to their third collective inflow in the past four weeks. As was the case during the previous four weeks, Global Equity Funds also recorded an inflow while Japan and Europe Equity Funds experienced net redemptions.

The week saw a modest increase in retail interest, with US Equity Funds recording retail inflows for the second time quarter-to-date and Global Equity Funds for the fourth week running while retail flows into Pacific Regional Equity Funds jumped to a 26-week high.

Large Cap Blend and Growth Funds again underpinned the headline number for all US Equity Funds during a week when Mid-Cap Growth Funds were the only major group to post an outflow. Quarter to date, Small, Mid and Large Cap Growth Funds have all posted collective performance gains of over 14% while the best performing group with a value mandate, at 12.4%, are Small Cap Value Funds.

Research by EPFR Analyst Winston Chua indicates that US companies remain on track for another banner year when it comes to shrinking their own free float. Although the pace has slowed recently, announced share buybacks YTD are running at a pace last seen in 2018. There have been a record 918 share repurchase announcements made by US companies so far this year, up from previous eight-month highs of 662 in 2018 and 740 in 2021 (in the first eight months of those years). Technology and financial companies have accounted for 55% of all buybacks in 2022, down 60% in 2021 and 65% in 2018, while announced buybacks from energy and materials firms have ballooned to a record $110 billion (14% of buybacks), smashing the annual record of $93 billion in 2019. 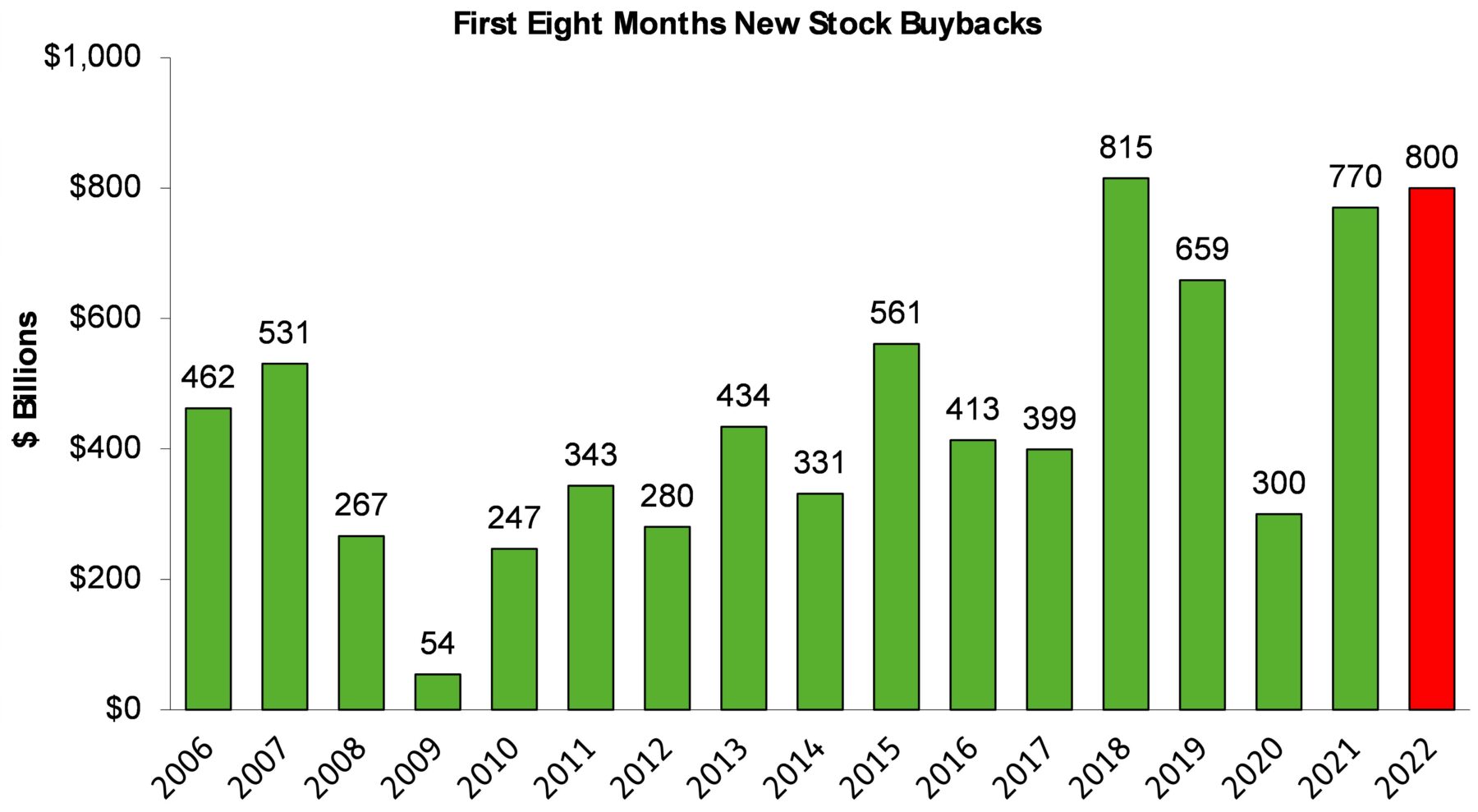 Japan Equity Funds posted their fourth straight outflow, improved domestic consumption and economic growth notwithstanding. China’s slowing economic growth and more aggressive stance towards Taiwan (POC) is worrying some investors. A fifth of Japan’s exports go to China and another 7% to Taiwan.

With barges struggling to navigate the Rhine, inflation in the UK hitting double figures for the first time in four decades, Italy heading into a general election and no end in sight for Russia’s invasion of Ukraine, sentiment towards Europe remains chilly. Europe Equity Funds extended their current outflow streak to 27 weeks and $81 billion. At the country level, Italy Equity Funds posted their sixth straight outflow and 25th in the past 28 weeks, flows into Denmark Equity Funds hit a 40-week high and UK Equity Funds experienced net redemptions for the 20th time in the past 23 weeks.

Global Equity Funds, the largest of the diversified Developed Markets Equity Fund groups, saw year-to-date inflows move close to the $65 billion mark. Through the first seven months of 2022 Global ex-US Equity Funds have taken in $3 for every $2 absorbed by funds with fully global mandates.