The second week of December ended with the US Federal Reserve raising its key interest rate by another 0.5% basis, the Dow Jones Industrial Average dropping 0.6% and EPFR-tracked US Equity Funds recording their biggest daily inflow since mid-March. Any euphoria that the pace of US rate hikes is moderating was, however, largely offset by fears that the peak of the current tightening cycle may still be as much as 100 basis points away. The day after the current reporting period ended, the Dow Jones slipped another 700 points.

Aside from the flows into US Equity Funds, the only major fund groups to take in over $1 billion during the week ending Dec. 14 were Japan Money Market Funds, Global Bond Funds and Equity Funds with socially responsible (SRI) or environmental, social and governance (ESG) mandates. A majority of the other groups recorded outflows.

Year-to-date, US Equity Funds rank in the top three groups by net inflows while last year’s top money magnet, US Bond Funds, are now at the other end of the scale. 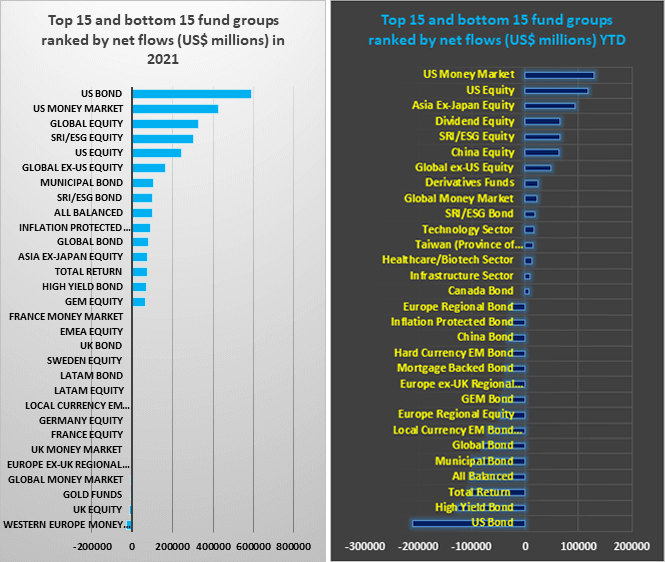 At the asset class and single country fund levels, flows into Germany Bond Funds hit an 11-week high, Korea Equity Funds experienced their biggest outflow in over six months and flows into Egypt Equity Funds climbed to a level last seen in 1Q19. Convertible Bond and Bank Loan Funds both posted their biggest outflows since the final week of September, Silver Funds posted their sixth outflow in the past eight weeks and redemptions from Derivatives Funds climbed to a 25-week high.

Despite the strongest flows into funds with socially responsible (SRI) or environmental, social and governance (ESG) mandates in over four months, EPFR-tracked Emerging Markets Equity Funds ended the second week of December by posting consecutive outflows for the first time since early June. All four of the major regional groups experienced net redemptions that ranged from $91 million for EMEA Equity Funds to $729 million for the diversified Global Emerging Markets (GEM) Equity Funds.

Investors retained their interest in frontier markets and that universe’s leading light, Vietnam, with Frontier Markets Equity Funds extending their longest inflow streak since 1Q17 and Vietnam Equity Funds absorbing over $50 million for the sixth straight week. But interest in Africa remains subdued, with Africa Regional Funds posting their fifth straight outflow and 28th in the past 30 weeks. The easing of zero-Covid restrictions in China presents new risks and opportunities for investors. In recent days the risks have occupied center stage as Covid cases spiked and China’s bond market came under pressure as domestic investors liquidated debt holdings and rotated to other asset classes. China Equity Funds recorded their 14th inflow in the past 16 weeks, with retail flows positive for only the third time since the beginning of August.

Elsewhere, flows into India Equity Funds climbed to a 12-week high while redemptions from Korea Equity Funds hit their highest level since the first week of June. Korea’s economy is struggling with higher domestic interest rates that are hitting heavily indebted households hard, a tougher environment for the country’s exporters and a weaker outlook for semiconductor demand. Funds dedicated to another market with a major semiconductor story, Taiwan (POC), posted their biggest outflow in exactly a year.

EMEA Equity Funds posted their fourth straight outflow, and biggest in six weeks, as fears that rising interest rates will push the world into recession, uncertainty in global energy and commodities markets and Russia’s ongoing assault of Ukraine sapped sentiment towards major EMEA markets. Saudi Arabia and Kuwait Equity Funds both posted above average outflows for the week and South Africa Equity Funds chalked up their fifth outflow in the past seven weeks.

Among the Latin America Country Fund groups, Mexico Equity Fund flows declined for the fourth week running as enthusiasm for the country’s supply chain relocation story was overshadowed by fears that US interest rates will peak at a higher level than previously anticipated.

Flows to US Equity Funds rebounded during the second week of December, lifting the headline number for all EPFR-tracked Developed Markets Equity Funds and allowing them to snap a three-week run of outflows. Japan, Australia and Pacific Regional Funds also attracted fresh money while Europe Equity Funds extended a redemption streak stretching back to mid-February.

Global Equity Funds, the largest of the diversified Developed Markets Equity Fund groups, also posted an outflow – their third in the past four weeks – as funds with fully global mandates surrendered five times the amount pulled from their ex-US counterparts.

The latest outflows from Europe Equity Funds were the biggest since early August, with retail redemptions hitting a 24-week high, as investors looked ahead to the European Central Bank’s final policy meeting of the year. The ECB also opted to hike its key rate by 50 basis points when it met the day after the latest reporting period closed. At the country level, investors pulled over $1.5 billion out of UK Equity Funds as that group posted its 25th consecutive outflow. Japan Equity Funds chalked up their biggest inflow since late October. Retail flows were positive for the fifth week running, flows into Japan Dividend Funds hit an eight-week high and funds with socially responsible (SRI) or environmental, social and governance (ESG) mandates recorded their 13th inflow in the past 15 weeks.

The biggest contributors to the headline number for all US Equity Funds were Large Cap Blend and Value Funds, with the latter posting a new weekly record despite record-setting redemptions from actively managed funds. None of the major actively managed groups by capitalization and style recorded an inflow for the week.

The second week of December saw US and UK export controls on China’s chip sales hurt that country’s technology sector, another US interest rate hike, Russian missile strikes continuing to destroy key infrastructure in Ukraine and Covid-19, although restrictions are being eased, continue to hit China’s growth prospects. Against this backdrop, Sector Funds had a better week with six of the 11 major groups tracked by EPFR posting inflows The level of money flowing in both directions was, however, muted.

Financials Sector Funds attracted the most of any group while Commodities Sector Funds suffered the heaviest redemptions. The latter saw over $450 million flow out — an 11-week high – as they recorded consecutive weekly outflows for the first time since late October. One fund with a broad mandate accounted for the bulk of the headline number.

Also hit by redemptions were Energy Sector Funds, which extended their current outflow streak to four weeks. One of the Energy Sector Fund sub-groups, Nuclear and Uranium Funds recorded their biggest outflow since late August. This group saw a significant spike in the level of money committed during 4Q21, with flows as a percentage of AUM climbing to 47% YTD, and started 2022 with a 17-week inflow streak that attracted $1.6 billion total and boosted by Russia’s ‘weaponization’ of its natural gas exports to Europe. Utilities and Healthcare/Biotechnology Sector Funds rebounded from the previous week’s outflows, Industrials and Telecoms Sector Funds were the only groups to post consecutive inflows and redemptions from Infrastructure Sector Funds soared to a 51-week high.

Among the fund groups dedicated to precious metals, Gold and Silver Funds recorded outflows for the second and third straight weeks, respectively, while diversified Precious Metals Funds posted their 23rd outflow in the past 25 weeks.

Going into the second half of December, investors had the change of pace they were looking for when it came to interest rate hikes by the US Federal Reserve and the European Central Bank. But they didn’t get the signal they were hoping for that the ‘pivot point’ for both central banks is close. The upshot was muted flows to EPFR-tracked Bond Funds during the week ending December 14th that took a turn for worse towards the end of the reporting period.

Among the major groups by geographic focus, Asia Pacific, Europe, Global and Emerging Markets Bond Funds recorded inflows this week that ranged from $23 million to $1 billion while US Bond Funds posted their third straight outflow.

Most of the major asset class groups recorded outflows. Investors pulled money out of Inflation Protected Bond Funds for the 16th consecutive week, redemptions from High Yield Bond Funds climbed to a nine-week high, Bank Loan Funds surrendered over $1 billion for the eighth time year-to-date and Mortgage Backed Bond Funds recorded their 15th outflow in the past 17 weeks. Emerging Markets Bond Funds posted consecutive weekly inflows for the first time since mid-August, with the latest the biggest since early April, as flows into Hard Currency EM Bond Funds hit a 17-week high. Flows into European-domiciled funds climbed to their highest level in over eight months while US-domiciled funds recorded their fifth straight inflow. At the country level Korea Bond Funds posted their biggest inflow since 4Q20 while Romania Bond Funds extended a redemption streak stretching back to mid-January.

Flows into Europe Bond Funds fell to a five-week low ahead of the European Central Bank’s final policy meeting of the year. Funds with sovereign mandates took in more money than their investment grade corporate counterparts for the first time since early November, Europe Inflation Protected Bond Funds recorded their biggest inflow since early August and Europe High Yield Bond Funds saw their longest inflow streak since 3Q21 come to an end.

Both of the major multi-asset groups, Total Return and Balanced Funds, experienced net redemptions. The last time either group recorded an inflow was mid-August.